How fast do kitesurfers go?

During a recent kitesurfing session, the water was pretty flat and the wind steady and I felt like I was going really fast.  I wondered what kind of speed I was riding at, so I decided to research it.

So how fast do kitesurfers go? Most kiteboarders commonly ride at speeds between 15 and 25 mph.  A normal kiteboarder can sometimes double the wind speed and get up to around 40mph given the right wind and water conditions and using the right kite size and board type.  Professional racers commonly attain speeds of 50mph and up to almost 60mph.

In addition to wind speed, many factors impact how fast you’re able to go kitesurfing, including water surface, kite type and size in relation to your weight, and technique.  Very fast riding, however, often comes at the cost of comfort and safety.

How fast can you ride when kitesurfing?

The following are some real-life examples of kitesurf riding speed as measured by different riders over different sessions using a kiteboarding GPS such as the popular Woo (Amazon page):

Kitesurfing at speeds up to 30mph can typically feel natural and safe when riding in strong and steady wind on very flat and shallow water.  In choppy or less than smooth water, on the other hand, you may feel like you’re going too fast and risk breaking bones if you fall, even though chop will actually slow you down.

Most riders feel most comfortable riding around 15-20mph in average water conditions.  If you ride a directional surfboard in waves, you’ll also feel safer and more in control at these kinds of lower speeds. 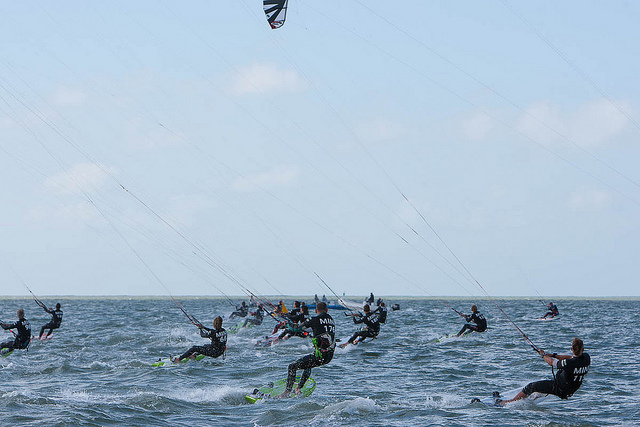 In general, the stronger the wind, the higher the speed you can reach (assuming flat water).  A kitesurfer can actually ride much faster than the wind due to apparent wind.  Apparent wind factors in the additional wind generated by the movement of the board itself.

As a result, a normal rider is able to ride significantly faster than wind speed, sometimes up to twice that speed.  A rider can go at least 20 knots (23mph) in 18-knot wind without effort, and much faster with the right conditions.

Besides wind speed, other factors that determine the maximum speed you can reach include:

How do kitesurfers build up and control speed?

In flat water, going faster involves finding the right trajectory in relation to the wind, typically at about 110º from wind direction.  The goal is to reduce friction by limiting your edging and rail resistance.

On the other hand, you don’t want to go fully downwind and flat on your board’s bottom side as this will create slack in your lines, possibly reducing kite power and speed.  Thus, you need to strike just the right balance.

To achieve maximum speed, the optimal angle of your board in relation to wind direction, and thus the degree of edging, will depend on your board.  Boards with different shapes build up different amounts of speed when ridden flatter on the surface, and when submitted to different traction from the kite.

Kite positioning is also important for speed.   Optimal kite position depends on the specifics of your kite.  Aspect ratio determines how deep in the window your kite needs to be positioned for maximum pull.  On the other hand, excessive pull kite can pull you out of your desired trajectory.

Besides building speed, a common concern among less experienced riders is staying in control when going too fast.  If you’re riding at 30+ mph and getting overpowered, you want to be able to slow down particularly if the wind is picking up and you’re using a big kite for you.

Controlling speed primarily involves edging hard upwind while raising your kite towards the 12:00 position to reduce pull.  In really strong winds, your body position is essential to shedding speed, turning your shoulders, hips and knees up toward the wind while steering your kite upward.

Do windsurfers or kitesurfers go faster?

This is a commonly asked question among existing and new kiters. There aren’t many races between kiters and windsurfers since the two sports have different optimal riding conditions. Also, windsurfers typically prefer to stay away from kitesurfers for safety reasons (lines/mast).

Kitesurfers and windsurfers also ride at different angles to the wind, making it hard to organize races between the two.

Windsurfers are almost always going as fast as they can, whereas kitesurfers often ride at half their max speed in stronger winds.  The main reason is that going faster for a kitesurfer requires him/her to ride somewhat downwind, which means working hard to go back upwind afterward.

Kitesurfers typically only accept going downwind for a “worthy cause” such as riding waves, doing jumps, or going on a pleasant downwinder (with land transportation for going back up).

Many kitesurfers also don’t like going too fast because slowing down gets harder once you start to lose control (see previous section) – it’s hard to reduce kite power and turn your body upwind when you’re strongly overpowered.  The easiest way is often to jump, but even that can be scary if you going really fast.

Another reason few kitesurfers focus on speed is that there aren’t many dedicated speed boards available on the market – most of the boards typically sold are twintips and kite surfboards.

Windsurfers, on the other hand, can build up speed easily in the chop as they can ride with their board flat (no edging) and lean on the back of the board to reduce the impact of waves.

In my experience, I seem to often overtake windsurfers even when riding a surfboard with a smaller kite (for my weight).  Then again, I never kitesurf in the kind of extreme conditions windsurfers go out in – I’m pretty certain a windsurfer would go much faster in such conditions.